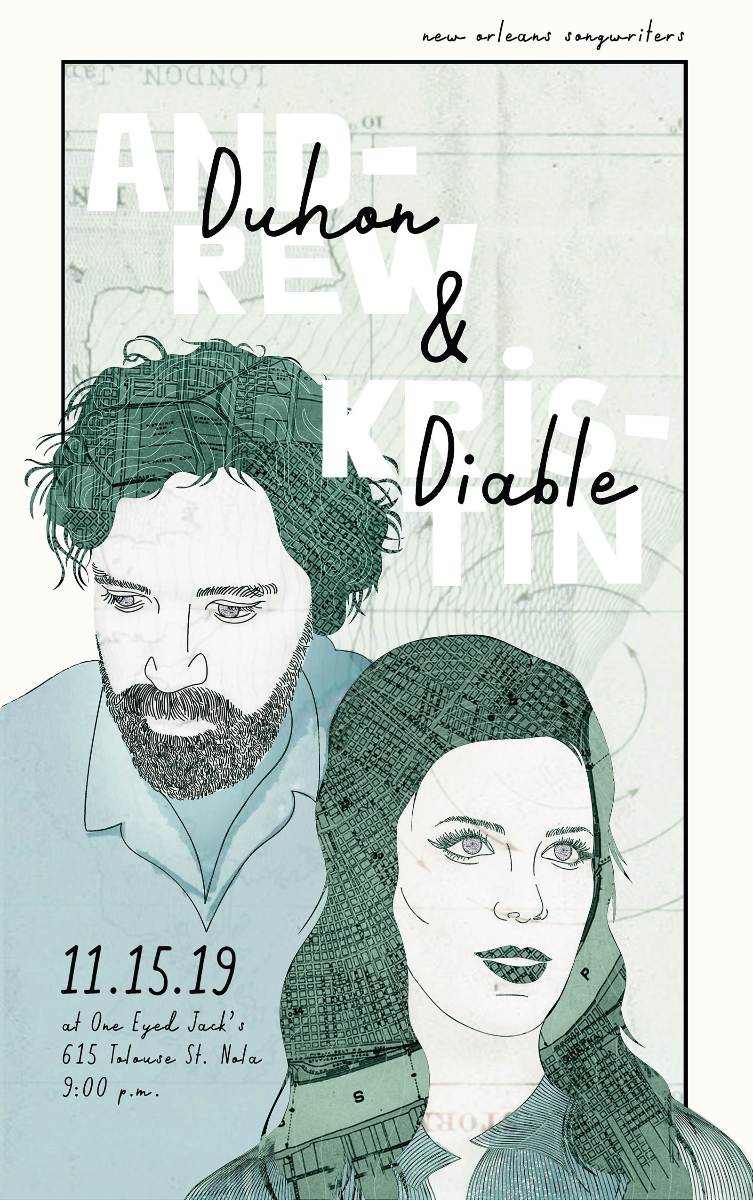 $20.00 - $30.00
Andrew Duhon is a songwriter from New Orleans, a teller of stories with an undeniable voice, weighted and soulful. Duhon has released 3 recordings, the latest of which, ‘The Moorings’, was nominated for a Grammy in 2014 for ‘Best Engineered Album’. He has toured solo for much of his career, and that troubadour element is certainly present, an usher of modern day folklore. His latest group, The Andrew Duhon Trio brings a new musicality to the tunes with upright bassist, Myles Weeks and drummer ,Maxwell Zemanovic. Since recording ‘The Moorings’ together as their first project, the Trio has been crossing the American landscape, touring and creating together, the thoughtful colors of the trio breathing a new musicality and direction into Duhon’s songwriting traditions.


”Diable’s bluesy rock gets Nashville glitz on this tambourine-bolstered barn-burner that rolls in like a summer storm and blooms like Southern magnolia." – NPR

New Orleans based songwriter Kristin Diable's sound is as mysterious as it is familiar. Her latest release "Create Your Own Mythology" (recorded in Nashville with producer Dave Cobb) was applauded by NPR, American Songwriter and Southern Living as one of the best of the year. A southern original, Diable’s voice bends as whimsical and unyielding as the Mississippi River, as her timeless melodies and lyrics channel the mystical within the everyday, the transcendent silver lining within the ordinary, weaving an intricate web of singularity that is Diable’s calling card. The band has toured far and wide with highlight performances from intimate listening rooms and theaters to Austin City Limits Festival, New Orleans Jazz Fest and all stops in between. Songs from her studio have been heard on television shows from CBS prime time on Hawaii-Five-O and MacGuyver, to Amazon's original One Mississippi (Tig Notaro), and HBO's True Blood and Treme. Diable is currently taking time off from the long road and is in the studio working on new songs for the band’s anticipated follow up album set for release in 2019.